No activity between the hours of 7 PM and 4 AM. The only exception is freezing rain or glare ice areas causing extreme traffic hazard areas.

Operations Division Manager or On Call Supervisor will make decision for 4 AM start.

Areas that are treated are Salt Routes which include bus and truck routes, arterial streets, State Highways and County Trunks within the City’s jurisdiction.

Operations Division Manager or Manager On Call will make decision to treat intersections, hills and curves on side streets after Salt Routes have been completed. Side streets are not plowed unless we are doing a general plow.

General Plow (entire city) called by the Mayor for all city streets to be plowed and parking ban to be placed. 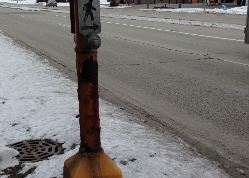 When heavy snows are occurring during peak travel times, main streets (arterials) will be continually patrolled.  Secondary streets (collectors) will be patrolled as frequently as possible.  Low volume residential streets (locals) may not be plowed until the storm ends.

During Normal Working Hour Operation
During After Hours Operations

When snowfall of less than three inches has accumulated, salt and/or plowing may be utilized.  Primary roads may be completely cleared of snow and salt applied.  Secondary roads will not be plowed but will have salt applied at intersections, hills and curves.

During regular working hours, the Operations Division Manager normally will be responsible for this operation and the decision to salt shall be approved by the Director of Public Infrastructure.

Plowing of priority 2 & 3 streets takes place when a snowfall greater than three inches has accumulated.  Under any circumstance, plowing will not commence until the Director of Public Infrastructure has authorized action.  If the Director is not available, then the Mayor shall determine the action.  If the Mayor is not available, the Operations Division manager shall determine action and continue to attempt to contact the Director or Mayor.

Outside normal working hours the On-Call Supervisor contacts the Operations Division manager.  The Operations Division manager will contact the Director of Public Infrastructure.  If the Director of Public Infrastructure is not available, the Mayor shall determine the action.  Before calling, the On-Call Supervisor shall know the snowfall accumulation and the forecast and have a recommendation of action prepared for approval.