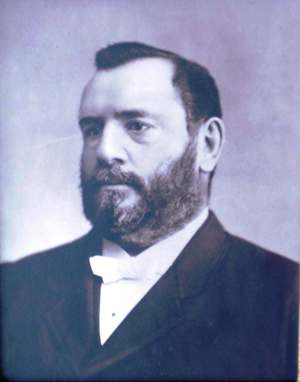 Joseph Vilas was born in Ogdensburg, New York (on the St Lawrence River in northwest New York) on March 31, 1832. Vilas attended Ogdensburg Academy and Union College in Schenectady, New York, graduating in 1846.
First Visit to Manitowoc
In 1852 Vilas came to Manitowoc to visit his sister Mary, who was married to Jarvis E. Platt, a local merchant. He found a teaching job and later turned to the mercantile trade with a job at Platt & Brother, owned by his brother-in-law.

On July 4, 1857, Vilas married Mary Platt, a native of Ogdensburg, New York. She was daughter to Moses Smith Platt and Ann Elizabeth (Stillwell) Platt. They had one son, Joseph Stillwell Vilas, born in Manitowoc on December 28, 1858.

Business Ventures
Vilas led an active business life. Becoming a partner in Platt & Vilas, the company engaged in mercantile trade, lumber, shipping, woolen goods, and flour. Vilas was the driving force behind the Milwaukee, Lake Shore & Western Railroad. With his own funds, public and private bonds, and local government support, the railroad line from Milwaukee to Appleton through Manitowoc, with a spur to Two Rivers, was constructed in the 1870s. Vilas also had interests in power and paper companies in the Fox Valley, as well as mining operations in Ohio, New York, and Arizona.
Collection
donate
Rentals
[]