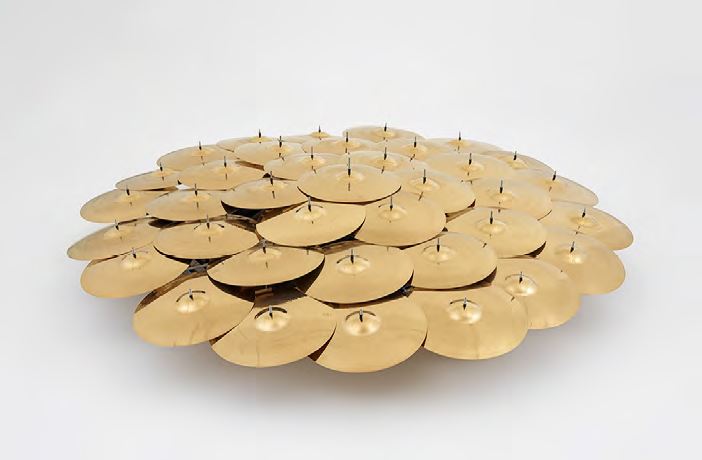 On loan from Art Bridges

This work will be on exhibit at the Rahr-West Art Museum from June 2 through September 13, 2020 thanks to the support of ArtBridges, an organization dedicated to expanding access to American Art.

Terry Adkins based the form of Native Son (Circus) on a faceted tortoise shell he owned. The artist never saw the completed work, constructed posthumously, based on his designs. The sculpture’s peaceful arrangement of cymbals periodically shimmers to life, generating clamorous and seemingly random music.

The work’s materiality and activation were inspired by the tale of how jazz saxophonist Charlie Parker began his career. According to the story, Parker accompanied legendary drummer Jo Jones during a set, and performed so poorly that Jones threw a cymbal at him. The aspiring Parker was jarred into a dedication that resulted in creative success and legendary status.

The narrative of passionate investment in one’s craft reverberates with Native Son (Circus). Like Parker, Adkins was a musician, and this work speaks to interdisciplinary practice. “My quest,” the artist said, “has been to find a way to make music as physical as sculpture might be, and sculpture as ethereal as music is... to make both of those pursuits do what they are normally not able to do.”

In His Own Words

I try to go beyond the realm of music into the reaches of sound itself as a material, and to try and give it enough physical presence...so visceral and gut-wrenching that it becomes a physical thing.
~Terry Adkins

Terry Adkins: Our Sons and Daughters Ever on the Altar at the Frist Art Museum

The title of this work references Native Son, a novel from 1940 written by the American author Richard Wright. It tells the story of 20-year-old Bigger Thomas, living in utter poverty in a poor area on Chicago’s South Side in the 1930s. It was one of the earliest successful attempts to explain the racial divide in America in terms of the social conditions imposed on African Americans by the dominant white society.

While not apologizing for Bigger’s crimes, Wright portrays a systemic causation behind them. Bigger’s lawyer, Boris Max, makes the case that there is no escape from this destiny for his client or any other black American since they are the necessary product of the society that formed them and told them since birth who exactly they were supposed to be.

The publication of Richard Wright’s Native son was not without controversy.  While it was a best-seller by an African American author, it was criticized for reproducing stereotypes of black men as brutish and sex-obsessed.  Others argued that it was a successful social critique.