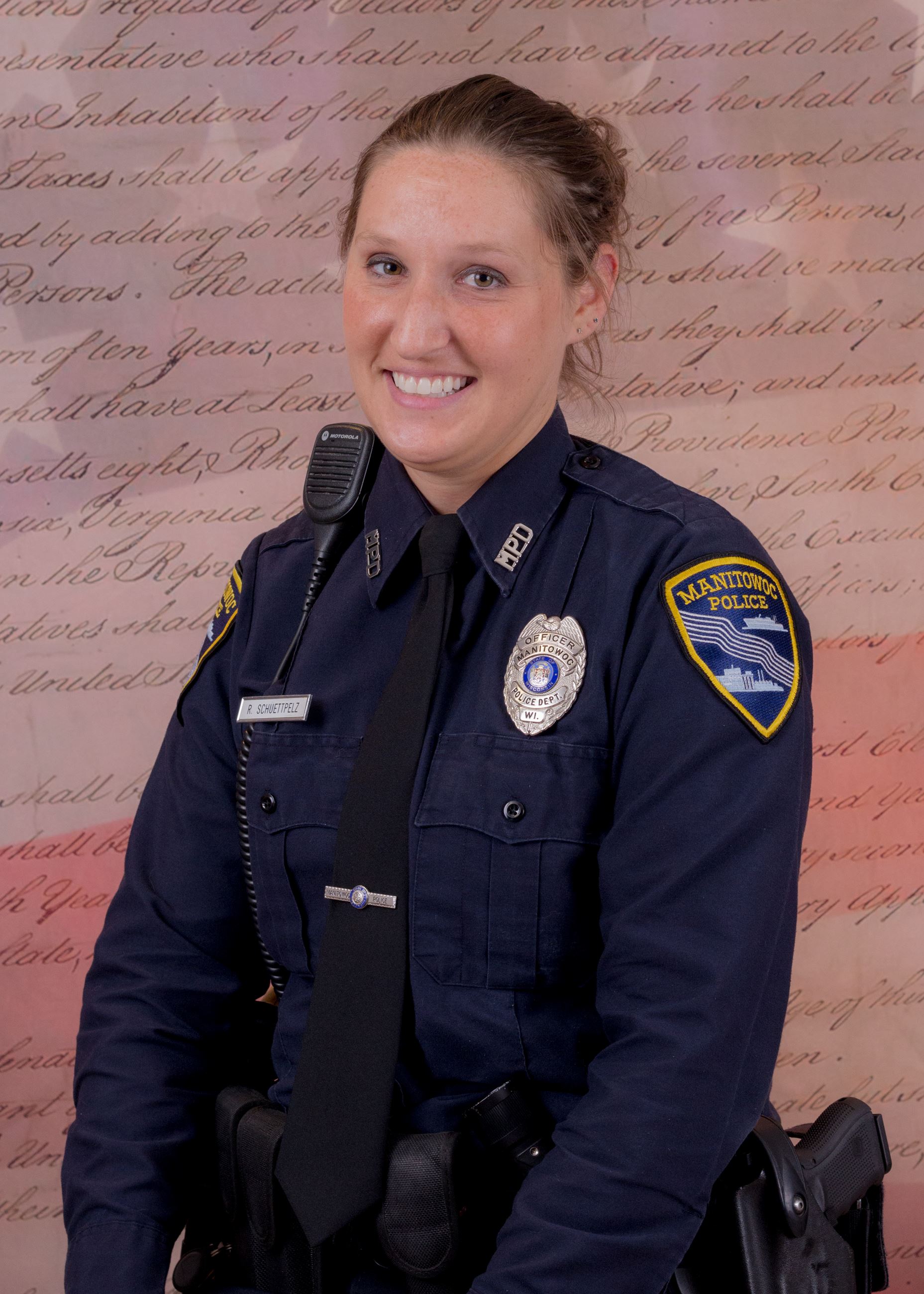 We would like to congratulate Officer Rebecca Schuetttpelz for being nominated and selected as the Manitowoc Police Department’s 2019 Noon Rotary Officer of the Year!

Officer Schuettplez has been with our police department since January of 2009.

Officer Schuettpelz received a nomination from Captain Jeremy Kronforst, Lieutenant Michaelyn Culligan, and Lieutenant John Musial. Rebecca was recognized in her nomination letter for her work ethic and the positive image she portrays.  During Rebecca’s 10 years as an officer for the Manitowoc Police Department, she has taken on numerous job duties and roles with the department.  She is currently a Field Training Officer, Drug Recognition Expert, Evidence Technician, Bike Patrol Officer/Trainer, maintains and calibrates the department PBTs, and is an Explorer Advisor.  Throughout the year, Officer Schuettpelz maintains a positive approachable demeanor in her interactions with the public and all staff she interacts with.  Rebecca excels in her job knowledge, problem-solving and decision making, and report writing skills.  She has volunteered countless hours of her time working with the Police Explorers, Shop with a Cop, and Stuff the Squad Events.  Rebecca’s work ethic and the positive image she portrays follows our value statement of “Excellence” by surpassing ordinary standards in the performance of her duties. We would also like to recognize Officer Miranda Check and Officer Nick Place who were also nominated for this distinguished award. 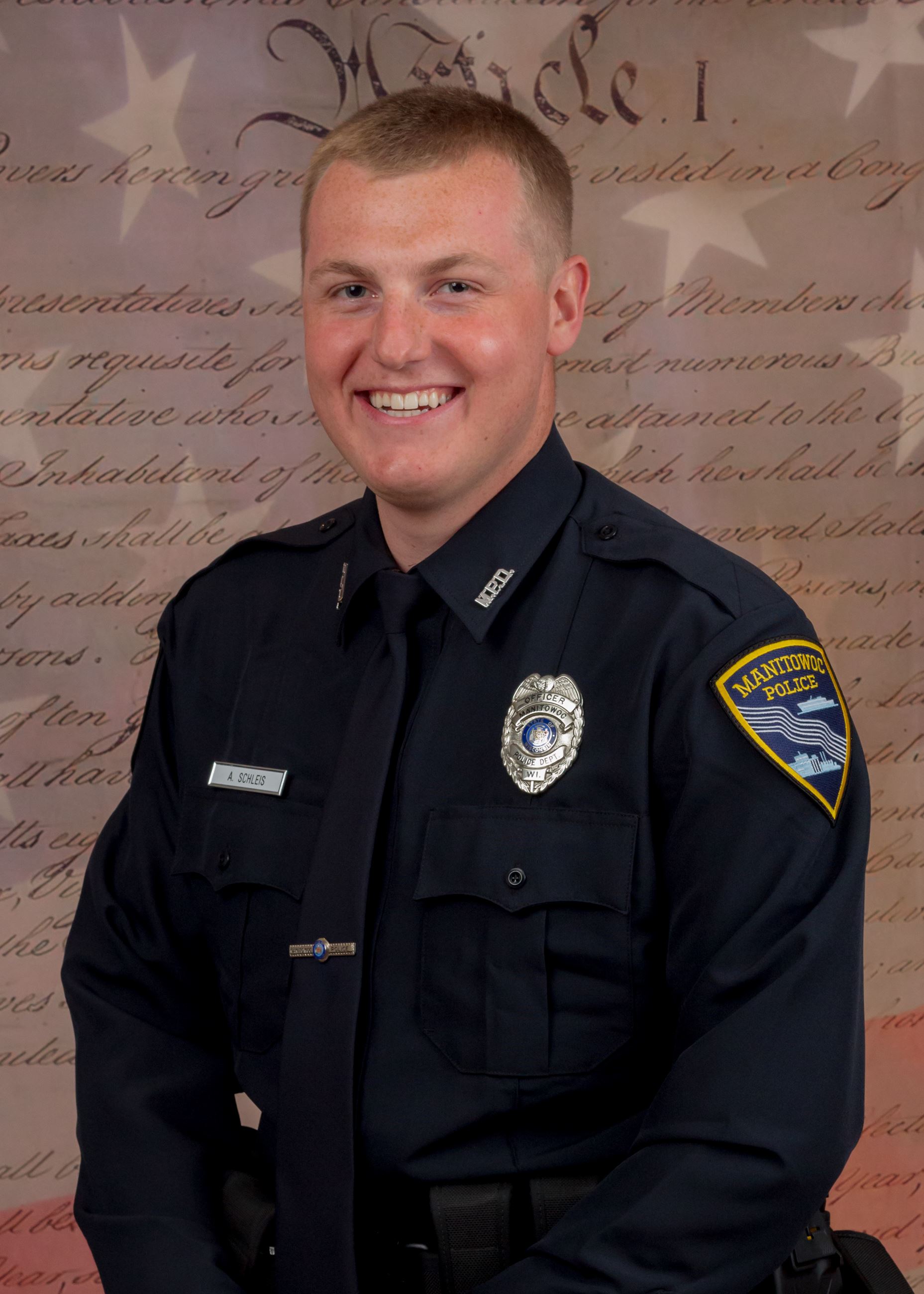 Officer Schleis was nominated by his direct supervisors who pointed out that even though he is relatively new to the Department, he has given countless hours back to the Manitowoc Community.  He is always willing to help others when he can and he displays selflessness on and off duty.

Officer Schleis organized the annual Stuff the Squad event hosted by Pick ‘N Save. He coordinated a date for the event, gathered police and other criminal justice agency volunteers, and also bagged groceries himself during the event. Citizens took the opportunity to purchase food and supplies for the less fortunate, which were then “stuffed in a police squad” and brought to Peter’s Pantry and the Salvation Army. The event was very successful in bringing needed food and supplies to the Lakeshore community during the stressful holiday months.

Officer Schleis also volunteered to participate in the annual Shop with a Cop event, which was again hosted by the Manitowoc Police Department. This event benefited numerous children from the local Big Brothers/Big Sisters Organization, who were able to purchase presents for their family members with the help of law enforcement volunteers.

The MPPA hosted a concert at the Capital Civic Center to fundraise and then give those funds back to youth programs and other charitable events in the community. Officer Schleis once again stepped up and greeted donors and guests at the door. This was a great way for someone in uniform to thank the donors for their generosity while gaining positive PR for the Police Department.

Some other events that Officer Schleis participated in were the 2019 Citizen’s Academy, the Lights of Christmas event hosted by the Pizza Ranch (benefitting the less fortunate), and the MTPD K9 Run/Walk. He also marched in the Memorial Day Parade as a member of the Color Guard.

Lastly, Officer Schleis has continued to be a referee and umpire for youth sports in the area. Many sporting events he is recognized as a Manitowoc Patrol Officer and he is well respected for his superior demeanor, attitude and ability. This is a thankless task and that is likely why there is such a shortage in this field, but Officer Schleis makes the most of it.

Officer Schleis is a shining example of what it means to have compassion, one of the core values of the Manitowoc Police Department. He has exhibited extraordinary enthusiasm and care for his community and is certainly someone who is doing the right thing, the right way, for the right reason!!  Congratulations once again to Officer Austin Schleis!!