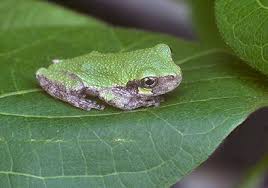 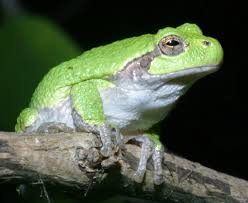 The zoo's collection of tree frogs live in an aquarium where they can be seen climbing the walls and sitting on the rocks and plants. Visitors sometimes have to look hard to find them because they also like to hide under the leaves and bury themselves in the dirt.

Facts
Conservation:   The grey tree frog is an amphibian of least concern.

Threats: They are threatened by habitat change due to human development and pollution.

When you come in the education center you will have to look hard for the green anoles because they like to hide in their exhibit of branches, moss, and rocks. They can be either bright green or dark brown depending on their mood, temperature, humidity and health.

Facts
Conservation:  Green anole numbers are secure at this time.

Threats: There are no threats to the green anole.

Wood frogs come in varying shades of brown and red. Most individuals have a black marking over the eyes that looks like a robber’s mask. During the breeding season, males can be heard making quack-like calls both day and night.


Conservations: Stable, but habitat loss due to farming and development may affect them in some areas.