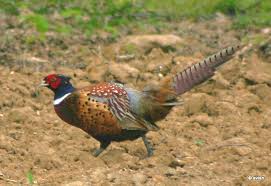 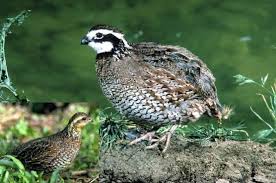 Coturnix Quail - The small brown Coturnix Quail also known as Japanese Quail live in the zoo's aviary. These small birds have been raised for years for meat and eggs for centuries.

Silver Pheasant - The male silver pheasant's striking black and white plumage makes it standout in the zoo's aviary. He matches the females by having a bare red face and red legs. The two brown females like to hide behind their shelter or by sitting very still to blend into their surroundings.

Yellow Golden and Red Golden Pheasants - The male's strikingly bright plumage of the zoo's yellow golden and red golden pheasants catch eveyones eye as they walk past the aviary. Each of the males shares their separate exhibit with two brownish females that blend into their habitat to hide.

The Coturnix quail is not in danger of becoming endangered for it is the most commonly found quail in domestic conditions.

The California quail is a species of least concern for becoming endangered.

The mountain quail is a species of least concern and are considered plentiful in their range.

The Silver pheasants population numbers vary by races. Some species' numbers are stable while other species' are listed as vulnerable.

The yellow and red golden pheasant are both considered as least concerned in becoming endangered.

There are no threats to the Coturnix quail species.

Although the California quail co-exist well at the edges of urban areas the increase of human population and urbanization has eliminated some of their habitat.

Mountain quail are threatened by a loss of habitat due to brush clearing and livestock grazing.

The Silver, Yellow Golden, and Red Golden pheasants are threatened by hunting and destruction of their habitat.