A boat ramp is located at the east end of Green Street, and there is parking area nearby.  This ramp is intended for small watercraft.

RAMPP IT UP! (Red Arrow Memorial Park Project) Construction is underway for the placement of a "Morning Sun" monument on the west side of the park (3 feet west of the intersection of  Villa Verde and Service Row trails) honoring the Red Arrow 32nd Infantry Division.

Bricks and memorial trees are great ways to honor and remember your favorite veteran (from any service or any era, including the Red Arrow 32nd Infantry Division) or to show the community that you or your company support veterans and the memorial at Red Arrow Park. Contact the Friends of Red Arrow (VFW 659) at (920) 901-0791 or visit their Facebook page at www.faceboook.com/redarrowpark. Click on a link below for more information about tree and brick memorials.

On June 28, 2018, Mayor Justin M. Nickels, with Command Sergeant Major (retired) Ed Hansen, President of Friends of Red Arrow Park, Inc. observing, signed an agreement with the U.S. Army TACOM Life Cycle Management Command to bring a M1917A4 155 mm Howitzer to Red Arrow Park.  This type of cannon was used by the 32nd Division during World War I and again during World War II.  The Howitzer was placed on the concrete pad near the entrance to the park.  The cannon was previously located in front of the Armory in Two Rivers. 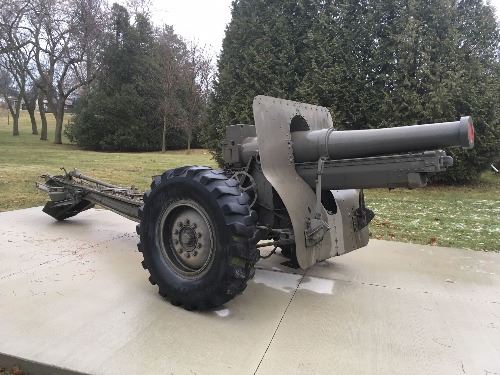 The M1917A4 was displayed until late fall of 2018 at which time it was moved to a shop for complete restoration over winter.  The cannon returned to the park in early spring of 2019.  Signage will be displayed telling the history of the Howitzer and its connection to the 32nd Infantry Division and to the local Red Arrow soldiers who served during WWII.

Reservations for rental facilities, such as the concession stand or open air shelter, may be booked online, by telephone with a credit card, or in person no earlier than one year (365 days) in advance of the date to be rented.  A signed rental agreement and payment of all fees and deposits is required at the time of booking.

To view a flyer or slideshow for a facility, click on the Facility Rental Flyers & Slideshows tab.

To make a reservation, click on the Facility Reservations Online tab, call the Parks Office at (920) 686-3580 (Monday through Friday from 7:00am to 4:00pm), or visit the office located in City Hall's Engineering Department on 900 Quay St.