General Information
Washington Park, a 3.75 acre park in the heart of downtown Manitowoc, was the first public park of the city to be improved.  It was gifted to Manitowoc by Benjamin Jones and originally intended for a market place, so that was the name it was known by for many years.  Washington Park was also the site of Manitowoc's first county fair in October 1859.  Today, the park features the MetroStage on which the summer concert series is held, as well as a fitness zone, and playground equipment.  A monument dedicated to educator Henry Vits is located on the west side of the park across from the site of a former school. 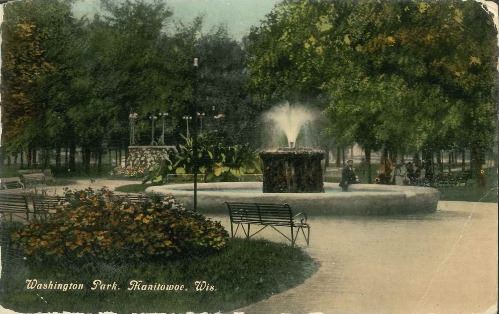 MetroStage
The MetroStage was built in 1996 and was dedicated to Donald E. and Margaret F. Hacker who were very active in the Manitowoc Musicians' Association, Local 195.  Mr. Hacker's leadership brought "exciting, innovative, and creative musical programming to the Manitowoc area."  The construction of a bandshell in Manitowoc was his idea which took almost 50 years to come to fruition.  Along with the fundraising of his group, the MetroStage was made possible thanks to a generous gift from the West Foundation, the support of the Manitowoc Jaycees, the families of Manitowoc, and the volunteers who put in countless hours.  More information about the MetroStage can be found on the website www.wibandshellsandstands.com.

To reserve the MetroStage for a Special Event, please complete a Special Event Application Form or call the Parks Division at (920) 686-3580.  For performers interested in being part of the summer concert series, please contact the Recreation Division at (920) 686-3060.  You will be required to sign a contract and submit a completed W9 form for payment.

Fitness Zone
A ribbon cutting for the new Fitness Zone, sponsored by Kaysun, was held at Washington Park on June 13, 2019.  The fitness zone equipment is located on the east side of the park north of the playground equipment.